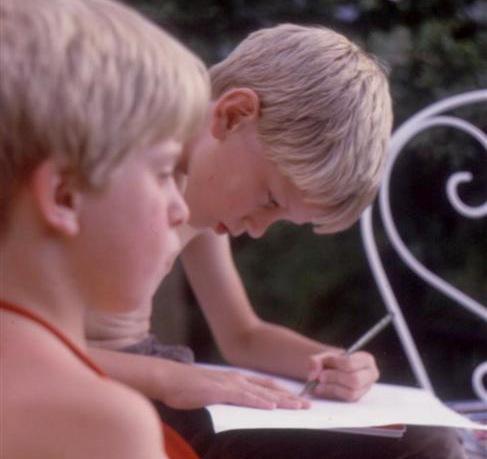 Since I could hold a pencil I was doodling, being creative, making things. My childhood was one filled with dead trees and the smell of pencil shavings, the margins of every school books replete with sketches of my imagined worlds.

As computers became a more prevalent part of my life a lot of my creativity moved to digital, using whatever tools I could lay my hands on; from Deluxe Paint 3 on the Amiga to doodlings in Inkscape and Gimp.

In 2009 I moved from my job as a self-taught web developer to become senior designer at a web agency in Edinburgh – a grand job title for what was essentially the lead designer in a small team of three – stepping into the (gigantic) footsteps of Roan Lavery as he went on to devote his time fully to the increasingly successful start-up, Freeagent.

Before then my job had been mostly building things (both back-end and front-end) and consultancy – making recommendations for the web strategy in the government agency I was working at. I actually did very little design as this was largely handled by the in-house print design team. I went into a designer role because I wanted to tap into the creativity I had always enjoyed but had hitherto just devoted to personal side-projects or pockets of freelance work.

It was a baptism of fire – truth be told one thing I had never done before was design to deadline and furthermore the expectation was to produce designs in a tool I had never used before: Photoshop. There was no time to learn a new tool on the job so I muddled along in the tools I could use – primarily Gimp and Inkscape – but also increasingly designing in the browser to speed up the process of getting design proposals into a CMS which had been a real bottleneck on delivering projects.

It worked to a certain extent but it was never a particularly quick process and under the spotlight of a boss that was panic booking work in to cover financial problems in the business it was not producing results fast enough. Furthermore I found myself constantly challenging and being disappointed with the work I was producing.

This perspective has continued into my freelance work and it dawned on me recently that I was slowly but surely falling out of love with being creative. Of the work I’ve done in the last year, the work that I’ve enjoyed least and that has made me the least money has been my design work. I have little or no confidence in the work I produce and constantly compare it to the (superior) work of my peers on twitter, dribbble and across our industry.

The thing is, I love web design. I love the excitement around new technologies to design and enrich user experiences. I love the medium, the conversations that surround what we do and the conferences where new ideas are discussed with old friends.

But I hate designing.

It has taken me three years to realise this and the impact this is making on my abilities to be happy in what I do and to make money.

With this in mind I have decided to stop designing for money. Instead I’m going to focus my freelance work solely on front-end development and ExpressionEngine work. I’m hoping this will give me the chance to work much more in partnership and collaboration with others and to focus my efforts on doing work that I enjoy and that is profitable.

But much more I’m also hoping that this will mean I can rediscover my passion for being creative. Because I love design.

But I hate designing.

You speak of a familiar feeling. I love design but I hate designing. I can spend hours in my browser or Photoshop tweaking a design or an element, but get put off when I see some of the amazing work being posted by my friends on a variety of networks.

Some people have too much talent.

Similarly, I have often thought about doing the same as you, concentrating on the front-end code as opposed to design but I don’t think I can.

I hope you can find a side project or two that’ll allow you to get creative in your time frame and allow your passion to come alive again. Being forced to design to a tight time frame can be detrimental!

Well said, it’s a case that needs stating… to be a designer in web pretty corrosive… it slowly bleaches any vibrancy you feel for your own prowess, the formats, techniques and fashions all change at a rate unheard of in other fields.

It’s a problem… I think the internet is young and web design even younger- so remember no-one knows what a retired web designer looks like. It may be they will never exist as the designer matures and shifts on to something less transient and ultimately less punishing.

This is strange that you have posted this now as I myself have been fighting over these thoughts too. Whether to stay designing or do more development. Don’t get me wrong I love designing, I love design, but I prefer developing. Great post, great timing (for me) and heres to the future…

As a former senior designer turned developer, i know how it feels to spend all day pushing pixels around in photoshop and feel you’re not realising your potential. I always found a lot more satisfaction in bringing ideas to life than in trying to flog some aesthetic creativity out of a brain that just doesn’t work that way.

One thing that a lot of people need to get their head around is that aesthetics do not equal creativity – making things that look nice is only one branch of creativity and as a front end web developer you have a hell of a lot to offer a visuals-focused designer that they can’t match.

I’ve benn teaming up with some very talented designers and because of my creative contributions we end up with a website or product that’s far better than if i’d simply tried to implement the visuals verbatim.

Putting aside the design side of your work isn’t admitting failure, or relegating yourself to a less creative role, it’s giving your true talents and creative abilities the chance to shine like the sun.

Hey there. I like your article. I’m a freelance designer in both web and print. I think sometimes to have a web project turn out it’s best, there needs to be that distinction between designer and developer. I don’t feel learning to be an amazing designer is something that can be learned with just dipping your feet in the water. While natural talent is essential, years of experience working in communication design, both web and print are what turn someone from a “beginner” into Senior Designer material IMO. There’s a point for most good designers where world class work should almost be a given. It then becomes a matter of stretching boundaries and improving communication and user experience within every project.

I do believe web developers are artists in their own right, but I feel 99% of the time, having that distinction between developer and designer produces the best results. It’s very rare you find someone who truly is very good at both. They are very different skill sets in many ways.

Unfortunately, being a one man team I’m usually forced to take on both roles. I often have to strive for “good enough” due to budgets, time constraints, and my own limitations as developer. Hopefully at some point I will be pursuing larger web projects with larger budgets that warrant me finding a truly talented developer for a partnership. This will be when I believe my work will be able stand up to the best.

Thanks for the interesting article and viewpoints.

Your article resonates with me. I’ve come back home bleary eyed after another day doing a job I have grown to dislike to the extent I believe it’s hurting my very existence and making me miserable.

I studied Graphic Design at uni and I wished I’d listened to my gut instinct back then which said “You don’t enjoy this, do you? In fact you hate it”… Instead I ploughed forth, believing that it was simply a case of ‘getting good’ at it and then I’d enjoy it.

After uni I was offered a job at a tiny company where a friend worked who needed someone to work on ‘web stuff’. Unfortunately, I’ve continued down this path blindly, drawn by the wealth of opportunity rather than a genuine passion for it. My latest job involves doing everything from banners, newsletters to redesigning the logo and massive web site redesign. It has bought me to tears, the stress of dealing with design and opinions of others with power in the company, it has burned me out. I feel like I regret ever getting into this industry and yearning to do something else. I just don’t know if it’s all down to me being bad at handling myself and my stress, or if this job is genuinely Un pleasant.